Includes a sample from Willow's Song composed by Paul Giovanni, which is from the film The Wicker Man.

Just behind the station
before you reach the traffic island
a river runs though a concrete channel
I took you there once; I think it was after the Leadmill

The water was dirty
and it smelt of industrialisation
Little mesters coughing their lungs up
And globules the colour of tomato ketchup
But it flows
Yeah, it flows

Yeah, underneath the city
through dirty brickwork conduits
connecting white witches on the Moor
with Pre-Raphaelites down in Broomhall
Beneath the old Trebor factory
that burnt down in the early seventies
Leaving an antiquated sweet-shop smell
and caverns of nougat and caramel
Nougat

And the river flows on

Yeah, the river flows on beneath pudgy fifteen-year olds addicted to coffee whitener, courting couples naked on Northern Upholstery and pensioners gathering dust like bowls of plastic tulips. And it finally comes above ground again at Forge Dam: the place where we first met.

I went there again for old time's sake, hoping to find the child's toy horse ride that played such a ridiculously tragic tune. It was still there - but none of the kids seemed interested in riding on it. And the cafe was still there too; the same press-in plastic letters on the price list and scuffed formica-top tables. I sat as close as possible to the seat where I'd met you that autumn afternoon. And then, after what seemed like hours of thinking about it, I finally took your face in my hands and I kissed you for the first time and a feeling like electricity flowed through my whole body. And I immediately knew I'd entered a completely different world. And all the time, in the background, the sound of that ridiculously heartbreaking child's ride outside.

At the other end of town the river flows underneath an old railway viaduct; I went there with you once - except you were somebody else - and we gazed down at the sludgy brown surface of the water together. Then a passer-by told us that it used to be a local custom to jump off the viaduct into the river, when coming home from the pub on a Saturday night. But that this custom had died out when someone jumped and landed too near to the riverbank and had sunk in the mud there and drowned before anyone could reach them. Maybe he'd just made the whole story up. You'd never get me to jump off that bridge. No chance. Never in a million years.

Yeah, a river flows underneath this city
I'd like to go there with you now my pretty
and follow it on for miles and miles
below other people's ordinary lives
Occasionally catching a glimpse of the moon
through man-hole covers along the route
Yeah, it's dark sometimes
but if you hold my hand
I think I know the way

Oh, this is as far as we got last time
but if we go just another mile
we will surface surrounded by grass and trees
and the fly-over that takes the cars to cities
Buds that explode at the slightest touch
Nettles that sting - but not too much
I've never been past this point
What lies ahead I really could not say

And I used to live just by the river
in a disused factory just off the Wicker
And the river flowed by day after day
And "one day" I thought
"One day I will follow it"
That day never came; I moved away and lost track
but tonight I am thinking about making my way back
I may find you there
and float on
wherever the river may take me

The kind of start point for The Wickerman was I got asked to write a piece for an English magazine called The World of Interiors, and they asked you for three things that had provided you with inspiration. And, of course, I was panic stricken 'cos I couldn't think of anything. And I was trying to think of things that had done that, and y'know, although obviously since the events that are described in [Wickerman] happened I've done a lot of things, and I've travelled around the world and all that kind of stuff. But for some reason [what occurred to me was] this time when I went on [..] an inflatable boat, and I went on a trip down the River Don, which is one of the rivers that runs through Sheffield. And it was really quite a magical day, because it was travelling through the city that I've lived in all my life, but seeing it from a different angle. And when you travel along the river and you're going with the current you feel like you're being taken somewhere, and I saw quite a lot of strange events.

One event that doesn't get mentioned in the song was this guy - stood at the side of the river - with an air rifle [..] and he was shooting it into the water, trying to shoot fish. And as he did it, he was going "stitch that, y'bastards". And it was just things like that, y'know, and that's always something that has really fascinated me: when you can find extraordinary events in very everyday circumstances. So I just got the idea of this river running through the city and the stories that had happened at various times, happening along the course of it. And also the river kind of providing a sense of continuity: a thread that runs through something.

[The] song has also got a sample in it which is from the film The Wicker Man, and I used to live on The Wicker, which is a kind of shitty street in Sheffield. So I thought: "Yeah, it's all coming together." [..] It all seemed to kind of mean something so I just made it into a story. 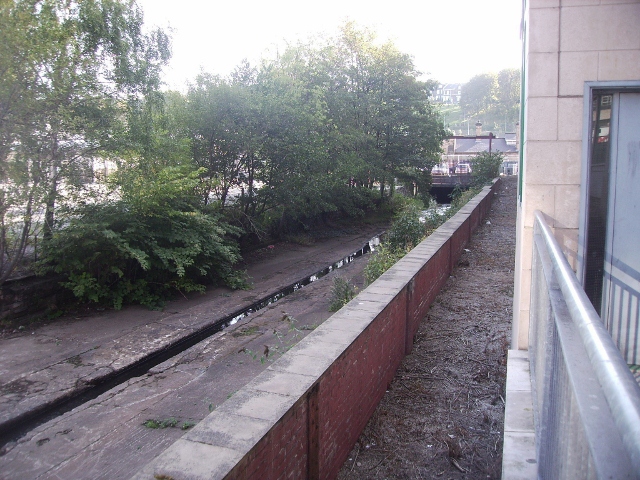 The concrete channel mentioned in the first verse of the song.
Located 'Just behind the station, before you reach the traffic island' Unfortunately the traffic island has long since been redeveloped and is not there anymore. 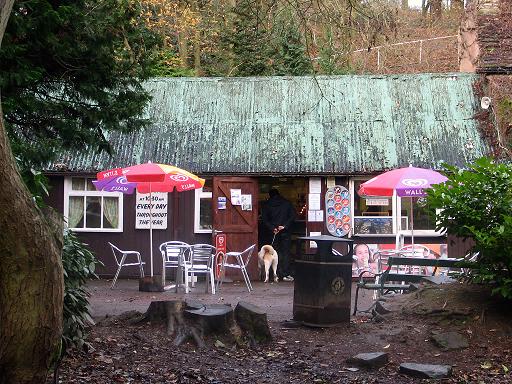 And the cafe at Forge Dam, Sheffield